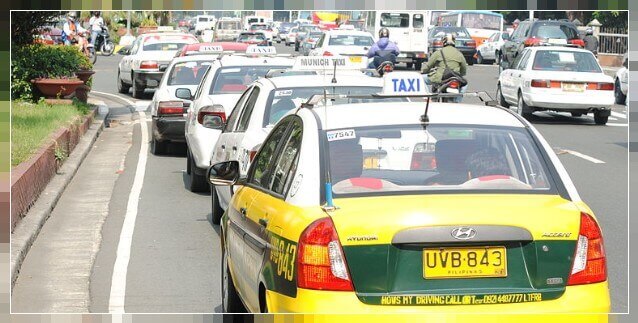 Whoever gets to see a Jeepney in Manila, may quickly get the impression that a Jeepney simply goes to where the driver is just steering. If you want to join the ride, you have to go on the street and quickly hop on. Provided that there is still space available! To somebody who is travelling in Manila for the first time, this may seem completely disorganised; however the reality is not quite as chaotic. Each Jeepney has, like in Germany, a fixed route. If the desired location is on this route, an intermediate stop can be arranged upon a shout to the driver.

Without the constant traffic noise of a taxi or Jeepney, the Philippines just were not the Philippines. Be it in the metropolitan city of Manila or outside – the daily noise of road traffic is your constant companion. In the province, the constant noise is also explained by the fact that each overtaking process is announced by blaring horns. Just in terms of colors, shapes and music, there are no limits to a Jeepney. Usually, a Jeepney expresses the bizarre personality of the operator or driver by very creative phenomena.

Jeepney Philippines – The bright colors of a Jeepney are part of everyday life in Manila.

Jeepney Philippines, Taxi Philippines – Do not be mislead to compare a trip from A to B in the Philippines with those in Germany. Whether you are traveling with a Jeepney or by taxi, you just can’t assume that a route of for instance on the A1 Wuppertal – Cologne (40 km), which normally takes half an hour, you will make in the same time in the Philippines. In view of the catastrophic road conditions and high traffic density, this does however not come as a surprise. Uneven roads with potholes everywhere are as much normal reality as the constant, never ending congestion and traffic in Manila.

Whether it’s the jeepney or the Taxi – Everything is allowed in the street of the Philippines!

The Filipinos seem no place for the importance of road safety. So they are real artists when it comes to keeping the entire family on a motorbike. They are often converted into crazy self-constructions in such a way that, for example, four people can sit on each side. It is therefore rarely felt that there would be any traffic rules in the streets of the Philippines. On the contrary: “We come first, drive first!”